One of my oldest friends – we’ve known each other since we were nine – is hearing impaired. When we were children, she had a machine in her bedroom called an ‘S’ indicator.

Its purpose was to help her to articulate the letter ‘S’. Basically, you hissed into it and a dial moved to show how ess-ish your S was.

I really like the fact that this machine existed – something designed to do one small task and to do it properly.

I have an automatic mistrust of objects intended to do lots of different things.

Shampoo and conditioner in one? No! I don’t want to wash and go! I want one thing that is really good at cleaning my hair and another thing that is good at making it silky soft. (Not that that I’ve ever discovered the latter – as anyone with very curly hair will appreciate.)

And what about those restaurants that offer you a choice of pizza, burritos, chow mein, chicken korma and toad-in-the-hole? How much faith do you have that any of those items is going to be cooked to perfection?

In 2005, Anthony my husband and I visited the Lake District with our 4-month-old baby. We went into a local bookshop and said ‘Do you have any books that might help us work out where we can go walking with an all-terrain pushchair?’

‘This might do the job,’ replied the bookseller, and handed us a book called: 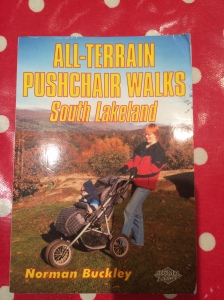 I found this immensely satisfying – even more so in the knowledge that if we were to visit the north of the Lake District in future, we’d be able to buy All Terrain Pushchair Walks, North Lakeland.

And speaking of ‘Lakeland’, the pleasure I take in objects designed for one purpose helps to explain the fact that my favourite shop bears this name. For the uninitiated, Lakeland is a kitchen and household shop that specialises in the most extraordinary range of kitchen gadgets. My own kitchen is crammed with its strawberry hullers, apple corers, banana bags, tuna can drainers and more. Much, much more.

Here, you can see me modelling my onion goggles – cleverly designed to stop you ‘crying’ when you chop onions.

They have the added benefit of making me look sexy, too. At least, when I forgot to take them off before answering the door to the Tesco delivery man, I think that was the effect they had.

Anthony has inherited from his German grandma a fork which is intended, exclusively, to hold hot new potatoes so that you can peel them. 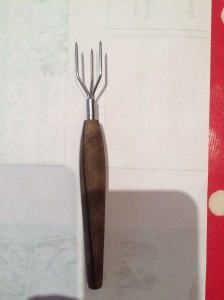 Many is the time it has saved me from that well-known menace of burned fingers caused by hot-new-potato peeling.

And yet, some of my most valued kitchen possessions are – unaccountably – mocked by visitors to our house. One example is this set of containers designed to store left-over halves of – respectively – tomatoes, lemons, onions and peppers.

No longer do I find mouldering bits of fruit or vegetable wrapped in clingfilm and forgotten at the bottom of the fridge drawer. It surely goes without saying that no household should be without them.

Which is why, when I opened my container for storing half a lemon a while ago, and found that Anthony had put half a lime in it, it was a very difficult time for me.

Our marriage has survived after some counselling, but it was touch and go for a while.

So, what objects do you appreciate for their highly-focused purpose… either at home, or in your professional life?

If you enjoyed this post and want more of the same kind of nonsense, there are several things you can do about it:

Follow me via email (you’ll get an email once a week). The link to sign up is in the right-hand margin if you’re on a computer, or below the blog posts if you’re on a smartphone.

The author apologises for the repeated references to lemons in her posts, and would like to assure you that she will attempt to give equal precedence to other fruits in future.